Nuclera raises $42.5M in first close of Series B for desktop protein printer

Nuclera’s eProtein™ desktop bioprinter is a breakthrough rapid protein prototyping and discovery platform that enables protein printing in just 24 hours, significantly faster than existing methods of protein synthesis. The eProtein bioprinter is powered by the company’s eDrop™ digital microfluidic technology – a core enabling technology borne out of the company’s strategic partnership with E Ink. The technology has gained significant traction with customers in the pharmaceutical, biotech, agribiotech, and synthetic biology industries, which are already working with Nuclera to accelerate their innovation pipelines.

The eProtein desktop bioprinter will initially screen and print proteins for research and drug discovery customers, and the funding will also fast-track the company’s march towards developing an all-encompassing proteomics platform. This will provide Nuclera’s eProtein customers with an instrument that will unify protein expression and characterization. The all-in-one platform will increase scientific reproducibility, accelerate drug discovery, and contribute to the ever-expanding bio-economy.

“There’s a fundamental productivity problem in biotech today. A biotech scientist needs to know how to make proteins to design drugs. That’s like expecting a computer scientist to know how to build a computer to design software,” said Michael Chen, Co-founder and CEO of Nuclera. “Our eProtein desktop bioprinter makes it easy for scientists to access the proteins they need in a single day rather than the weeks, months, or even years it currently takes. The new financing and partners we are announcing today is a strong vote of confidence in our mission to increase the accessibility of the drug discovery and general bio-innovation process.”

Andrea Traversone, Managing Partner at Amadeus Capital Partners, added, “Nuclera’s eProtein platform unites the very fragmented workflow that currently exists in proteomics. Nuclera is bringing rapid prototyping—a concept that did not exist until now—to biotech, and by speeding up research and opening up completely new avenues of innovation, it will have a far-reaching impact in numerous markets. We have been very impressed with the quality of the team that Michael and his co-founders have assembled and the unique technology they are developing.”

Nuclera is the leading pioneer in making biology accessible through its eProtein™ desktop bioprinting technology. Headquartered in Cambridge, UK, Nuclera was founded in 2013 by four PhD students at the University of Cambridge who were frustrated by the inaccessibility of biology. Nuclera has since grown to 60 employees across two continents as the Company delivers on its founders’ vision to make biology accessible to everyone through desktop bioprinting. With desktop bioprinting, researchers and scientists will be empowered to take control of biology through streamlined access to a next-day supply of proteins. Three exciting Nuclera technologies protected by 45+ patents enable Nuclera’s desktop bioprinter: eProtein™ synthesis, eDNA™ synthesis, and eDrop™ digital microfluidics. The combination of these technologies in a deployable desktop bioprinting platform creates an unprecedented one-stop shop ecosystem that enables Nuclera to provide consistent biological workflows, products, and information to its customers. To be a part of Nuclera’s effort or to simply learn more, please visit www.nuclera.com.

Nuclera was founded by four PhD students in 2013 in the first year of their PhDs at the University of Cambridge.  Co-founder Tobias Ost joined in 2019 to bring his pioneering NGS experience to Nuclera’s R&D effort.

In May 2021, Nuclera announced it acquired the digital microfluidic operations at E Ink in Boston, Massachusetts along with a UK Future Fund investment led by E Ink.

The company now has 70 employees and is headquartered in Cambridge, UK and Boston, Massachusetts.

Nuclera was advised by Taylor Wessing, Stratagem, and PEM for this transaction.
*|END:IF|* 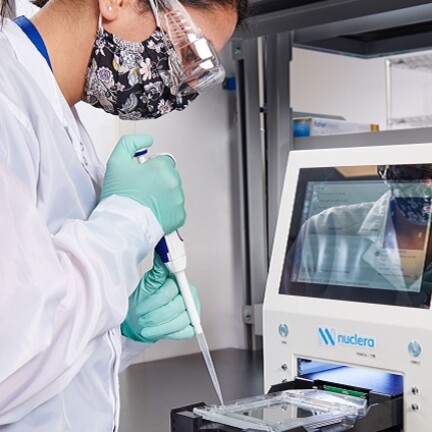