Paragraf is a developer of graphene based electronic technologies. Having mastered the manufacture of graphene, the company has moved to production in graphene electronics starting with a magnetic field sensor that has many applications, including EV battery manufacturing, electronic drivetrains and cryogenic applications such as quantum computing.

Here Simon Thomas describes the challenges of manufacturing with a novel material just one atom thick and how Paragraf was propelled forward by its discovery of how to make large-area graphene.

When spinning the company out of Cambridge university, Amadeus was one of the first VCs Paragraf engaged with. Simon describes how Amadeus has been right behind the startup in delivering its long-term vision to be part of the semiconductor industry, building a leadership team and focusing on successful commercialisation, while opening its manufacturing facility just north of Cambridge.

Paragraf started selling its first product, the Graphene Hall Effect Sensor, which is making such great traction, that the company has expanded its sales capability globally. It is now focused on developing graphene-based biosensing, which has the potential to revolutionise point of care, saving millions of lives.

There is also the opportunity ahead to displace current silicon-based technologies in the computing world, transforming the performance of computers operationally and reducing power consumption. And in three to five years, the company intends to have its first demonstration products in that area on the market.

Paragraf is in the business of delivering game-changing technology. Its purpose is to change people’s lives for the better and it’s been able to attract people who share that vision to join the team. 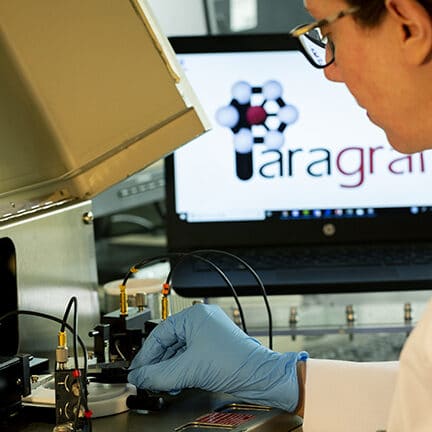